Addressing the inaugural ceremony, Minister Natung said that this is the first time in the North eastern state the international standard climbing wall has been constructed. The government under the leadership of Chief Minister Pema Khandu is giving equal importance to all disciplines of sports. I am always in the helm of affairs for the promotion of games and sports in the state. He said.

Congratulating sports department for successfully completion of climbing wall He said many youth from the state will be get benefits from this climbing wall and hope that after training in this wall our youths or climbers will be make proud to state as well as nation by performing in national and international level. He also hopes that coaches will give best of the best training to our youths who are interested in the said discipline.

He also advised the officers of sports department to respect and felicitate the players and Association of any disciplines of sports of state, because there are many complaints that sports department is not recognizing many players and Association though after winning the medal in national and international level.   We should encourage them because every game and sport is equally important. Natung said.

He also assured that this year he will keep a sufficient budget for the sports department.

All the officers were sincerely working their works, there may be some clerical mistakes which are being rectified through discussion, said Minister Natung and without knowing the reality of sports department people are blindly defaming the sports department through social media, he added.

Further he also discussed that the state government is going to prepare a road map to participate in upcoming Olympic games from the state.

This is the first international standard climbing wall within the entire North eastern state with heights of 15 miter with three disciplines like lead climbing, speed climbing and bold ring and in this wall we can organize international level competition also, said Shripad Sapkal, national coach. 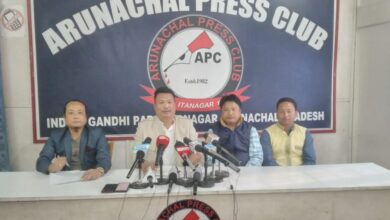